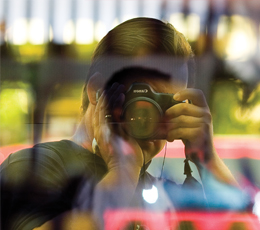 Thomas Hawk’s hauntingly beautiful — and often gritty — photography is admired across the world. He calls himself a “photography factory” and aims to capture 1 million photos before he dies. Among his favorites are images of American cities, particularly those in various states of decay: “I think people will want to go back in the future and remember a different type of America; a place that was unique to their timeframe,” he says.

But to say Hawk is revered for his art is only partially true. He’s also an avid blogger who writes about a wide range of issues, including new media, technology, creative commons, and copyright law. With a massive fan base across Flickr and Google+ in particular (more than 6.5 million followers), Hawk is sought by brands to photograph events and locations, and share this visual content with his audience. Yet, Hawk cautions: “Don’t ask artists to shill your story.”

Clare McDermott: How do you work with brands outside of traditional photo licensing agreements?

Thomas Hawk: I’ve had a lot of inquiries over the years to shoot specific commercial things, and I’m not interested in that, so I’ve turned down almost all of that work. I really want to shoot what I want to shoot.

I’m not in it for the money. What I’m interested in more than anything is access. When JBL [the premium speaker and audio company] sponsored the music festival Coachella last year, they gave me a press pass and I was able to get all these photographs of great bands. Dell asked me to fly out and shoot the Austin City Limits Music Festival. I wouldn’t have had that level of access without its corporate sponsorship.

I don’t want to just go shoot some random boring event; but if there’s some unique opportunity (for example, I love live music) or access to something that I wouldn’t have otherwise as a photographer, I’ll do a lot of that. I don’t get paid for those. I don’t ask for money. Typically they only cover hotel and airfare.

McDermott: Any other interesting ways that you are seeing brands work with artists, aside from live events?

Hawk: I’m seeing more and more brands asking photographers to create authentic content. I went to Detroit with Ford and shot the North American International Auto Show the year before last. I also went and shot the Cosmopolitan Hotel before it opened and flooded pictures all over Flickr. How often do you get to shoot a completely empty multimillion-dollar casino? The brand gets a lot of really nice photos on Flickr and other platforms, as well as a built-in social network. When people do searches for the Cosmopolitan Hotel, they see images that look really good. If it works out, it’s a win-win; they provide something to the photographer and, again, it doesn’t have to be about money.

I’ve had companies before say, “We’ll give you $6,000 if you write three blog posts about this lens.” I have no interest in that. But if you can provide me access to create interesting content, I’m all for it.

McDermott: How should a brand approach an artist?

Hawk: It can be as easy as just reaching out, but you’ve got to be careful. I’ll get blind emails saying, “We want you to promote our stuff.” It sounds very commercial, and it’s a turnoff. There are brands that do it well. Scott Monty at Ford, for instance, does a wonderful job as its Head of Social Media. Scott has built relationships with a lot of artists, so when you get an email from him with a request, it’s a very friendly and welcome email. Rather than cold-pitching bloggers, photographers or artists, brands would have a lot more success if they designate someone to build the relationship.

Essentially, brands have to think creatively and figure out how to work with an artist beyond “Here’s some cash.” They need to think about what they can bring to the artist, what kind of opportunity or collaboration.

Hawk: My primary objective with my own work and art is to distribute it as widely as possible in the world. The internet is one big distribution source, and it allows me to connect directly with millions of people. Before, you had to rely on gatekeepers and curators — whether a gallery owner, museum curator or whatever — and it was very difficult to achieve a mass audience and following. Now it’s so much easier.

McDermott: Are you partial to one photo-sharing social network versus the others?

Hawk: I was very vocal and very critical of Flickr for many years, primarily because I saw so much potential for Flickr and no innovation all the years Yahoo! owned them. Since Marissa Mayer joined Yahoo!, Flickr has become a major turnaround story. I’ve grown from one of Flickr’s biggest critics to one of its biggest fans. Markus Spiering, the head of product at Flickr, has done tremendously positive things since he’s taken over.

I do love Google+. It’s probably my favorite social network right now, especially for imagery. Photography is one of the most engaging types of content on the web.  It’s super easy to go down a page and “+1″ 10 photos.  It takes a bit longer to read an article and decide if you want to “+1″ it. Imagery, because it moves so quickly and you can say so much very simply, appeals to our desire to see beautiful and interesting things. Google has recognized that.

I also love what Facebook is doing. If you think back of where Facebook has been, three years or so ago photos were tiny little postage stamp size things on Facebook. Now, look at them. With the Instagram purchase, they understand the power of photography. Even Twitter had said recently it’s going to make photos bigger and better.

Photography is becoming a language unto itself. People talk back and forth to each other with photos, even more than words.

Don’t ask an artist to shill your brand: Purely promotional collaborations won’t be of interest to established artists. Instead, offer access — be it to a music festival, a new city, or an off-limits location. Virgin American offered Hawk travel expenses paid to Toronto. The result: Stunning photos of Toronto that both Virgin and Hawk are proud to share.
A great collaboration benefits brand and artist: When the Cosmopolitan Hotel in Las Vegas asked Hawk to photograph on location before it opened to the public, Hawk jumped at the chance to capture the massive, empty casino. The result: Hundreds of beautiful and unusual images flooding social media leading up to the hotel’s opening.
Build long-term relationships: The best way to understand what an individual artist may be willing to do is to get to know him or her. Cold requests may be viewed with skepticism. Explains Hawk, “Scott Monty at Ford has built relationships with a lot of artists, so when you get an email from him with a request, it’s a very friendly and welcome email.”

This article originally appeared in the February 2014 issue of Chief Content Officer. Sign up to receive your free subscription to our quarterly magazine.